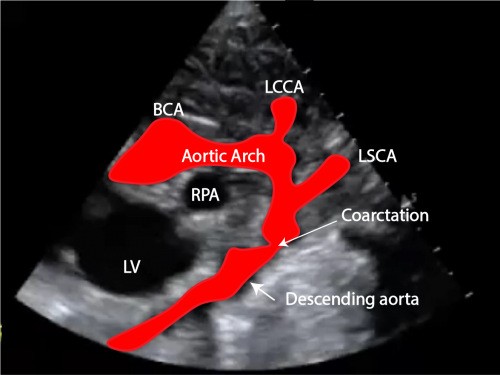 A 11 day old presents to the Emergency department in acute respiratory distress. His mother states that his SOB has increased markedly over the past 24 hours.  While on the way to hospital he has an episode of tachypnea  cyanosis and not breathing for 5 seconds. He has been feeding poorly all day. He has not had a fever.

On examination he is in significant respiratory distress, RR 100/min  with increased work of breathing. He is sweaty and mottled. His peripheries are cool. The lower limb peripheries are cooler than the upper limbs. His central capillary return is 3 -4 sec. His distal capillary return 4 -5 sec. His upper limb BP is 90 mmHg systolic, his lower limbs 60 mmHg. He has hepatomegaly and pedal oedema

Iv access is obtained and he is given high flow oxygen.

Coarctation of the aorta is suspected. 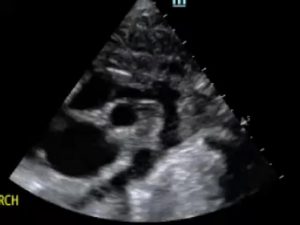 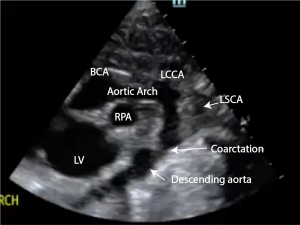 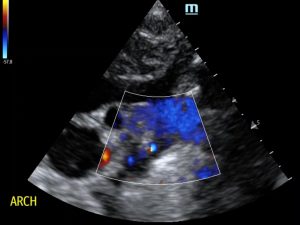 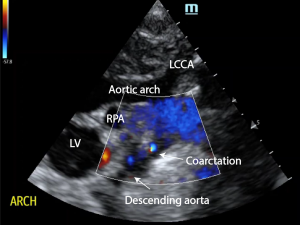 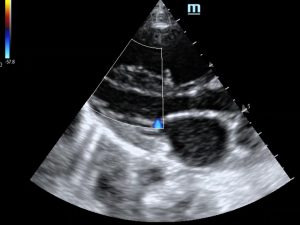 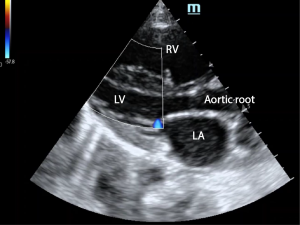 PSAX : There is flattening  towards the LV  of the interventricular septum (D shaped left ventricle).

The subcostal view shows a fixed and dilated IVC

This is his lung ultrasound. More than 2 B lines are seen between 2 rib spaces highly suggestive of pulmonary oedema

In summary, the baby has coarctation of the aorta with evidence of pulmonary oedema and right heart strain.

He is started on a prostaglandin infusion (prostin 10ng/kg/min) , is subsequently intubated and given ionotropic support in the neonatal intensive care.

Formal ultrasound confirmed a coarctation of the aorta 6 mm from the left subclavian artery, a PFO and a bicuspid aortic valve. No PDA was identified but by the end of the study a  small right to left shunt PDA was observed

Coarctation of the aorta

Types of infantile coarctation and presentation 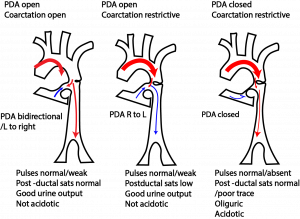 Presentation in the neonate

Differential diagnosis of shock in the neonate