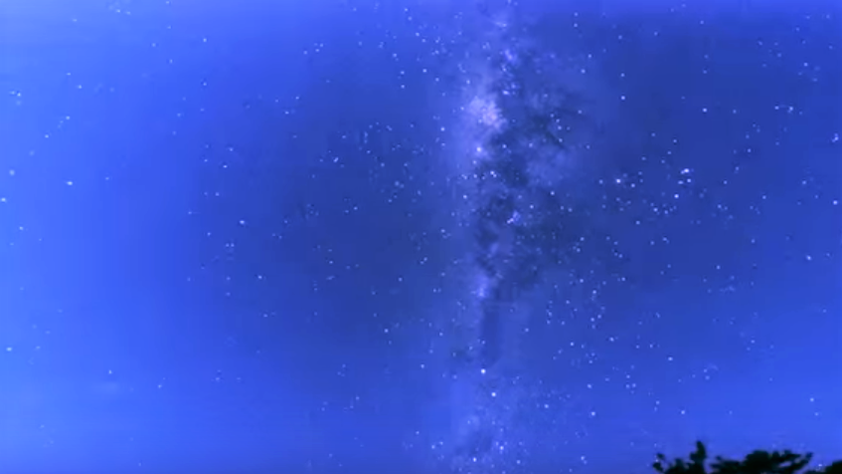 A 32 year old man presents with right flank pain. He had an episode of renal colic 2 years ago and presented to the Emergency Department back then. He had a CT KUB done at the time which showed a small stone in his right VUJ and a larger 7mm stone in his right renal calyx. He is in agony and cannot lie still. You give him opiates and nonsteroidal antiinflammatories. When his pain settles a little you do a focussed bedside ultrasound. Below is his right kidney and left kidneys taken longitudinally 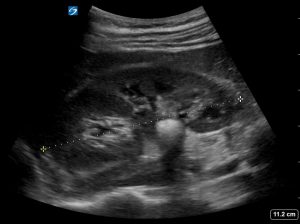 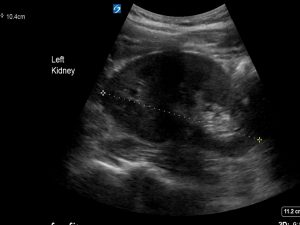 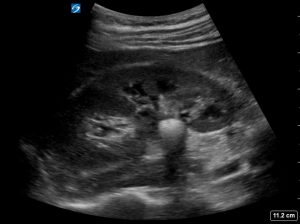 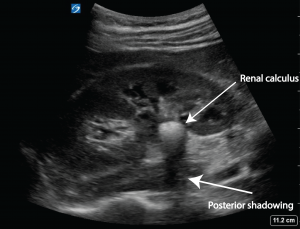 Note that there is no hydronephrosis. This is more evident on the transverse view of the kidney 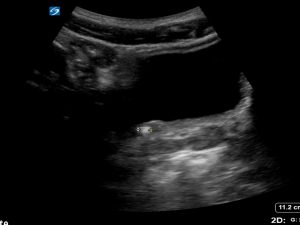 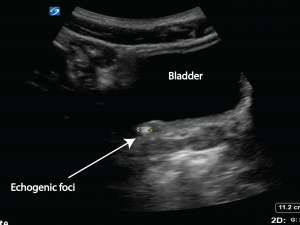 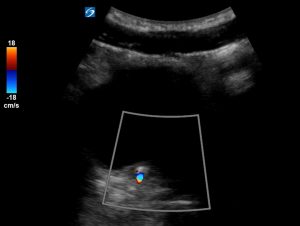 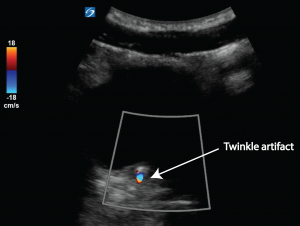 Why use Colour Doppler to help identify stones and what is the twinkling artifact?

Sonography of the renal tract to look for stones is not as sensitive or as specific as CT scanning. We have seen this in a previous post. The great advantage however is that sonography does not irradiate the patient especially in a group of patients who tend to have multiple CTs for the same pathology. In an uncomplicated case of renal colic, an ultrasound can help with diagnosis and disposition. Unfortunately, the visualisation of stones with ultrasound is operator dependent and therefore the sensitivity ranges between 19 -93%  with a specificity of 84 -100%. Experienced radiologists attain the highest sensitivities and specificities for the identification of stones. When stones are small they may not produce characteristic posterior shadowing. This is due to spatial compounding which creates shadows at different angles that are averaged (1) Using colour Doppler to look for the twinkling artifact improves the ability to confirm the presence of small stones especially if an acoustic shadow is not present. The twinkling artifact was first descibed by Rahmouli et al in 1996 (3)

This artifact is associated with several characteristics (2) 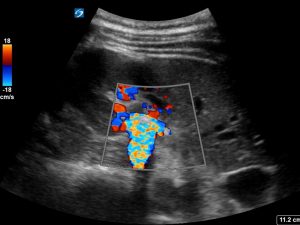 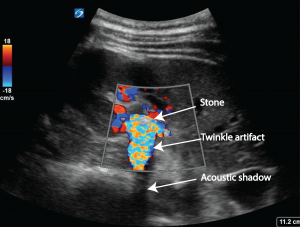 This has been observed in previous studies (7) as a potential misdiagnosis of blood flow. 2 D  imaging was clearly sufficient in this case to diagnose the large renal calculus.

On the other hand, the twinkle artifact produced by the small non-shadowing stone in the VUJ was helpful in confirming the presence of the stone.

What causes the twinkling artifact?

I’ve come across four different theories, none of which seems to be widely regarded as the leading contender. They are:
– the key thing is that the structure causing the artifact has a rough surface;
– the cause is “phase jitter” in the machine’s electronics (this seems improbable to me);
– the cause is small gas bubbles trapped on the rough surface (this comes from Jonathan Rubin’s group and doesn’t seem to be widely embraced by others);
– the cause is movement of the structures due to ultrasound radiation force.

My guess is that the first of these is correct, and that slight movement of the stone (or other structure) causes significant changes of the echo signal (because of the rough surface). The machine misinterprets these changes as random Doppler shifts. The movement may be caused by the patient’s respiration and transmitted arterial pulsation and/or slight unconscious movements of the probe. Radiation force may also cause movement.