There is a BAT call. The ambulance are bringing a 72 year old woman who suddenly , in front of her husband, was seen to  slump to one side and appeared to have a left hemiplegia. In transit to hospital she has become less responsive and has arrested in the ambulance. On arrival she is intubated, and chest compressions are continued with a LUCAS device (automatic external chest compression device) in the Emergency Department. She has an impalpable pulse. Her ECG shows electrical activity. This is “true” PEA.

This is her subcostal view while the LUCAS is operating.

There is clearly a large pericardial effusion, some of which is echogenic suggesting a haemopericardium. 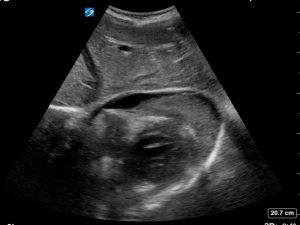 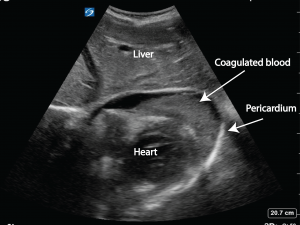 An immediate apical pericardiocentesis using an 18g syringe is attempted using direct ultrasound guidance. Below the needle can be seen inserted in the top right hand of the image 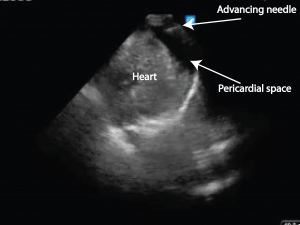 Only a small amount of blood can be aspirated and there is no ROSC. Note that there is still some cardiac contractility.

The 2 most likely causes of haemopericardium causing tamponade and cardiac arrest would be a post infarct ruptured ventricle  or a type A dissection with extension into the pericardium. The abdominal  aorta is immediately insonated and a dissection flap is visible. 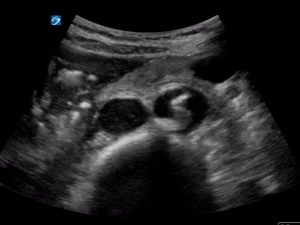 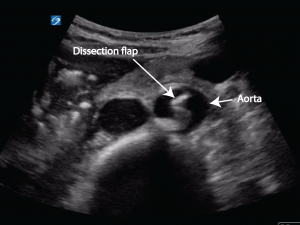 This is the aorta in the longitudinal section 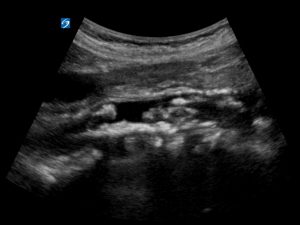 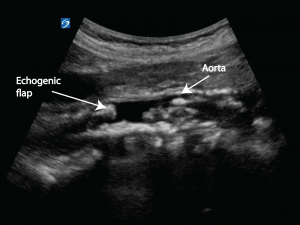 A clear cause for this woman’s cardiac arrest is therefore identified which fits her clinical story of acute onset  left sided weakness followed by a decrease in level of consciousness and then  cardiac arrest (dissection into the pericardium causing pericardial tamponade).  She remains asystolic on ECG monitoring and the decision is made to remove the LUCAS device. An ultrasound is quickly obtained parasternally.

There is no cardiac activity. The patient is still in asystole. Resuscitation is stopped.

Point of care ultrasound is an improvement on the manual pulse check in  cardiac arrest. It enables visualisation of the the myocardium looking for cardiac contraction. Point of care ultrasound can also help in identifying reversible causes of cardiac arrest such as hypovolaemia, pericardial tamponade, pulmonary embolism and tension pneumothorax  and non treatable causes such as this Type A aortic dissection which was unsurvivable. The lack of cardiac activity in association with asystole triggered the end of resuscitation efforts.

When do we terminate resuscitation?

Termination of resuscitation should also include focussed point of care ultrasound  findings. Prognostically a non contracting myocardium in cardiac arrest is not survivable and this should also be taken into consideration when deciding on when to stop CPR.