A 38 year old man presents to the Emergency department with shortness of breath which he has had for 4 weeks. His symptoms have worsened  over the past 3 days. He can no longer go up 2 flights of steps to his apartment  and he has noticed his  ankles have been swelling. He is married and has had recent work stressors which he is unwilling to talk about. He denies smoking, or alcohol but after much discussion he admits to smoking 1 -2 pipes of methamphetamine a day. On examination his heart rate is 130/min, his BP 140/80, saturations 94% on RA, he has mild pitting ankle oedema and bibasal crepitations on chest examination. 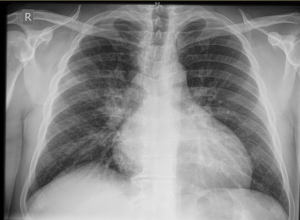 You decide to do an ECHO

This is his PLAX view

This is his Apical 4 C view

The LV  and RV are very poorly contracting and there is a thrombus visible at the apex of the LV.  The RV is dilated. 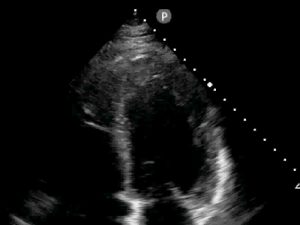 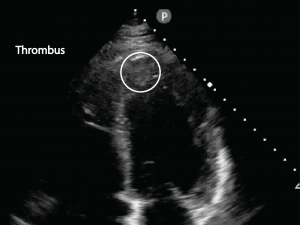 There are 2 aspects of this case to discuss. Firstly cardiac complications of methamphetamines, secondly LV thrombus formation

The following is an excellent article published in April 2016  on the Cardiac Complications of Methamphetamines, by Elizabeth Raratz and Neil Cunningham(http://www.heartlungcirc.org/article/S1443-9506(15)01489-4/pdf)

The following is a brief summary of a small section of this superb article:

ECHO in the diagnosis of ventricular thrombus (2,3)

Teaching point:  With the increase prevalence of  use of methamphetamines, the Emergency Physician should be aware and looking out for cardiac complications of methamphetamine use.  Look for LV thrombi in patients with any form of cardiomyopathy who are not anticoagulants. Patients who present with acute heart failure post unrecognised MI have a risk of having LV thrombi.