The Emergency phone rings directly from the paramedics. They have a  59 year old woman with acute onset chest pain. BP 75/40, diaphoretic. HR 110/min in atrial fibrillation. She has a past history of hypertension.

The ECG is faxed through 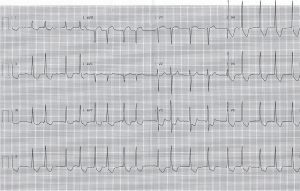 Widespead ST depression and T wave inversion in the inferior and lateral leads.  The cardiologists are rung and the cath lab  made ready for this patient.

On arrival to the Emergency department, the patient is pale, diaphoretic , BP 80/40,    HR 92/min. She is in atrial fibrillation.

The cardiology registrar is there with the  wardsman. They are  to take her straight to the cath lab.

While waiting for transport, a quick ECHO is done by the Emergency doctors.

What can you see?  If you look at her left ventricle, the walls come together in systole, (kissing ventricular walls). The LV is small and  the walls are thickened and there is also a very prominent thick papillary muscle.  At the level of the left ventricular outflow tract (LVOT) there appears to be an obstruction to flow during systole.

Her short axis shows almost complete obliteration of her left ventricle in systole. She has a small LV cavity

In this Apical 4 chamber, even though the quality of the image is poor, the mitral leaflets can be seen moving towards the IVS during systole.  Is there an obstruction of the LVOT ?  An apical 5-chamber view with CW Doppler across  the  LVOT  is used to measure the pressure gradient. 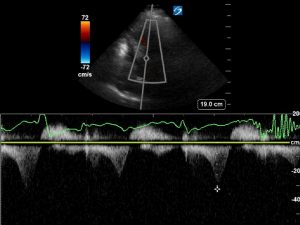 Continuous wave Doppler though her LVOT shows a sabre shape Doppler spectral trace with a late peaking acceleration, typical of LVOT obstruction.  The peak gradient of the LVOT CW signal was averaged at 44mmHg. (Normal is approx. 4mmHg)

So what was the problem and what did we do?

Her problem was that she had left ventricular outflow obstruction. Her small LV  was not filling adequately because she had diastolic dysfunction related to her hypertensive heart disease, so LV diastolic filling is already reduced in this patient. Then she went  into atrial fibrillation and without the 15-20% late diastolic filling provided by the “atrial kick,” her LV filling was comprised. Poor LV outflow was compromising her  coronary  perfusion and hence the ischaemic changes on her ECG . The Apical 4 chamber view suggested systolic anterior motion, (SAM) of the mitral valve which was the cause of her  LVOT obstruction, proven by the use of the CW Doppler.

To improve her ventricular filling, she required cardioversion and iv fluids. When fluid loaded and reverting to sinus rhythm she regaining her “atrial kick”,  providing  that extra 15-20% blood bolus to her late LV diastolic filling.  Both her fluid load and reversion to sinus rythm improved her  LV stroke volume, improving her BP. 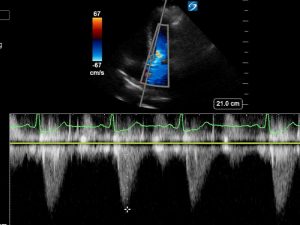 The continuous wave Doppler trace across the LVOT / Aortic valve is now no longer late peaking and the velocity has reduced from approx 3.3m/s  (44mmHg) to about 1.4m/s (8mmHg.), (in the presence of a normal aortic valve). 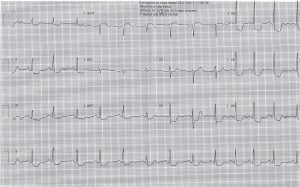 There is still ST depression in the inferolateral leads, but she is now in sinus rhythm and her T waves are no longer inverted. Her BP quickly improved to 110/60

15 minutes later her ECG was repeated 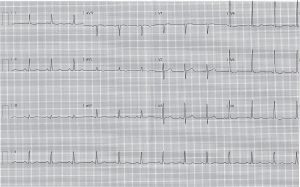 All her ST changes have resolved and this looks like a normal ECG, other than voltage criteria for LV hypertrophy.

Teaching point: Think about LVOT obstruction in patients who present hypotensive to the Emergency Department. This is especially true of patients who are underfilled, hypertensive or have known HCM. Remember that a rythm abnormality such as AF with a ventricular rate of 90 -100 b/min should not be the cause of  significant haemodynamic instability unless it is causing LVOT obstruction.

So what is SAM?

SAM stands for systolic anterior motion of the mitral valve. It is when either the anterior or both the mitral valve leaflets move towards and may contact the IVS (interventricular septum) during systole. The longer the contact the more severe the LV outflow tract obstruction. This movement causes the obstruction of flow from the LV (left ventricle) into the aorta. Below the movement of the both the anterior and a scallop of the posterior  MV leaflets clearly move towards the IVS during systole. 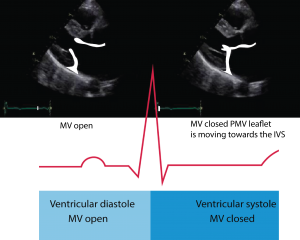 In diastole the MV is open, in systole it closes, but the AMVL and a scallop of the PMVL are seen moving towards the IVS 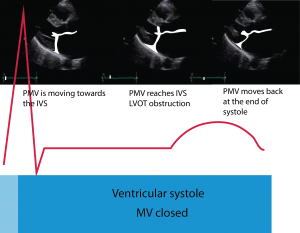 In mid systole, the AMV leaflet and PMV leaflet scallop reach the IVS, causing LVOT obstruction and then moves back towards the midline of the LV.

SAM is usually associated with some form of subaortic obstruction such as in patients with hypertrophic cardiomyopathy (HCM). It is the cause of the “O” (obstructive) in HOCM. SAM can also be found in patients with hypertensive heart disease, diabetes (in the context of LVH), acute myocardial infaction, after mitral valve repair or surgery for aortic stenosis, and even in asymptomatic patients during pharmacological  stress with dobutamine.

“Functional” SAM has been described in association with pheochromocytoma, induction of general anaesthesia, catacholamine infusion and hypovolaemia in critical patients.

Why does it happen?

There are 2 theories regarding to why is occurs. The first is the Venturi effect. The theory behind this is that a  region of low pressure develops as blood flows through an area of subaortic obstruction (such as HCM) at high velocity. This low pressure drags  one of the leaflets, usually the AMV leaflet to be pulled in the direction of blood flow through the LVOT, causing obstruction. Another theory is that it occurs because of anatomical differences in the position of the papillary muscles and valve leaflets  in particular the length of the MV leaflets. Most likely it is a combination of both.

When does it happen ?

This is a dynamic obstruction. It is not always present. Hypovolaemia, exercise, medications such a nitroglycerine, dobutamine and the Valsalva maoeuvre may unmask SAM.

How do you manage it in the Emergency department?