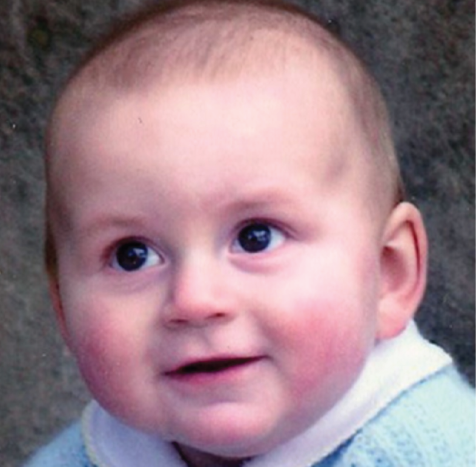 Images and text by Genevieve Carbonatto and Jeremy Fry

Sam was 4 months old when he was brought by his parents to the ED. He presented with acute onset of crying and distress which awoke him from sleep. He was grunting and drawing his knees up to his chest. He had been well throughout the day and opening his bowels normally.

He in fact had had a previous episode of sudden onset crying and distress 2 weeks earlier lasting several hours. It was followed by a large vomit after which he seemed to settle.  His mother had rung the ambulance at that time but the ambulance had refused to take him to Emergency.

He had been born by elective LSC/S at 40 weeks. On day 2 he had an episode of hypoglycaemia with an associated hypoglycaemic seizure. He was found to be hyperinsulinaemic. He was admitted to NICU/special care nursery for 8 days but all metabolic screens were normal and his insulin levels and BSLs normalised without further treatment. He has subsequent normal growth and development.

On examination he was grunting with intermittent periods of distress and crying. His abdomen was generally distended and tender with apparent guarding though abdominal exam is always difficult in distressed infants. He was afebrile, HR 160, SpO2 100% and CR < 2 sec. Bowels sounds were difficult to auscultate due to crying. 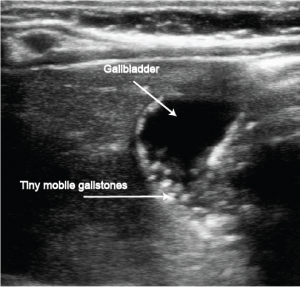 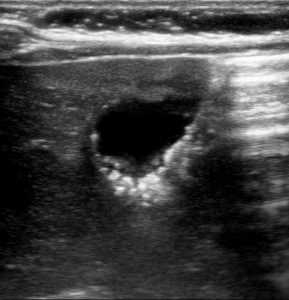 This is his GB. Multiple tiny gallstones are visible in the gallbladder. They were highly mobile  and associated with sludge.

So how common are gallstones in this infant paediatric group? Should we be considering gallstones in all infants that present with severe abdominal pain to the Emergency Department?

To find out more about gallstones in this paediatric age group, I found a great review article by Ujjar Poddar in Indian Paediatrics. The following is a summary of this excellent article.

Gallstone disease is being  increasingly diagnosed in children in recent years. It is difficult to know whether this is a true increase or whether it is due to better and more timely imaging in patients presenting with undifferentiated abdominal pain.

What is the prevalence of gallstones in children?

Probably between 0.1 and 0.3% overall but with a bimodal distribution. There is a small peak in infancy and then a steady rise from early adolecence onwards. Children with chronic haemolytic disease are a special subset. Cholelithiasis is usually not seen before the age of 5, the prevalence thereafter increasing steadily to be over 40% in children over 10 years of age.

How do infants present with cholelithiasis?

Usually gallstones are asymptomatic and are found incidentally when ultrasound is being performed for an unrelated problem. They  can present with cholestatic jaundice, transient acholic stools, sepsis and abdominal pain. In symptomatic,  infants,  gallstones are more associated with stones in the common bile duct than in the gallbladder alone.

What is the aetiology of gallstones in children?

How do we manage gallstones in infants?

If the infant is asymptomatic, then the management is essentially one of waiting and repeating the ultrasound to see whether the stones have passed. Spontaneous resolution of stones is common in over 50% of infants with idiopathic stones. Otherwise, in infants with persisting symptomatic cholelithiasis or aymptomatic cholelithiasis present for over 12 months with radio-opaque calculi, cholecystectomy is indicated. An alternative is  dissolution therapy with Ursodeoxycholic acid but this has had disappointing results

So what happened  to our little boy?

All screening tests for primary causes of gallstones (haemolytic anaemic etc) were negative and his blood tests normal. Our little boy was great for about six months and then had another episode of grunting and abdominal pain. He represented to the Emergency Department and was given intranasal fentanyl after which his symptoms settled. This was followed by 2 days of being intermittently unsettled with abdominal pain/colic and grunting lasting minutes at a time.

He was to start dissolution therapy but had a follow up Ultrasound before treatment which showed no gallstones. He had no doubt passed them!

Gallstone disease in children should be considered in the differential diagnosis not only of children with abdominal pain but also of infants presenting with abdominal pain. Ultrasound is a valuable tool in the Emergency department to look for gallstones even in the infant population.