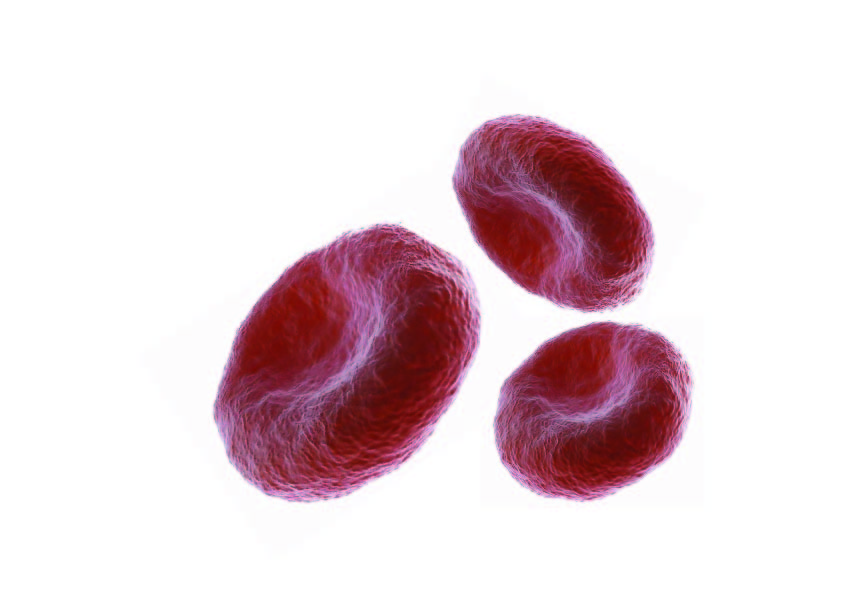 An 85 year old presented to our Emergency Department  with light headedness fatigue and SOB. BP 90 systolic on arrival , HR 100/min

Past history of AAA endovascular repair 4 years ago, history of PR bleeding 5 years earlier. All investigations so far negative for the cause of anaemia including gastroscopy and endoscopy. He had not followed up on his yearly vascular ultrasound check  of his aortic graft 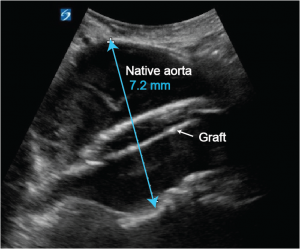 Longitudinal view of the aortic aneurysm 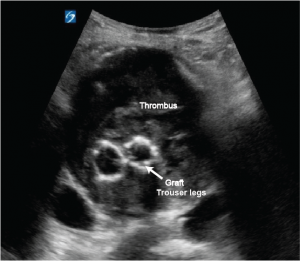 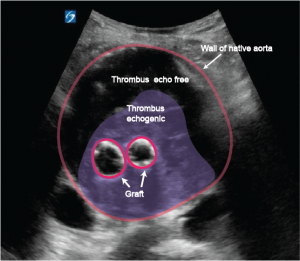 CT confirmed the large aneurysmal sac surrounding the trouser leg graft and an extraluminal contrast at the level of L3 and L4  raising concern for a type 2 endoleak supplied by a lumbar artery. Also a Type 3 endoleak was found  posterior to the right iliac graft and at the junction of the left iliac graft.

Endovascular aneurysm repair (EVAR)  is complicated by endoleaks in 20 to 25% of patients. This is a potentially serious complication which may lead to  abdominal aortic rupture. There are five different types of endoleaks, which are classified based on the source of vessels that causes the inflow into the aneurysm sac 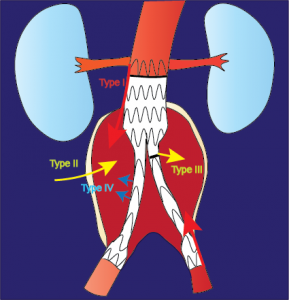 Endovascular aneurysm repair results in aneurysmal shrinkage in most patients. 2. If  the aneurysmal sac does not shrink or if it enlarges then the possibility of an endoleak needs to be entertained. Endotension is a situation where an endoleak does not exist but high postoperative intrasac pressures are present which may  lead to enlargement of the aneurysmal sac.

It is worthwhile scanning the aorta of patients presenting to the Emergency Department who have had an endovascular repair to look at the size of the native aorta especially if there has not been ongoing yearly vascular ultrasound follow up. An enlarged aneurysmal sac should prompt formal vascular ultrasound investigation.

With respect to our gentleman. Could an ongoing endoleak have caused his anaemia? Not from the leak per se, but yes if the leak had contributed to increased sac pressure and the development of an aortoenteric fistula

The following is an extract of the excellent discussion on aortoenteric fistulas  from Gastrointestinal Complications of Abdominal Aortic Aneurysms by Emmeline Nugent and Paul Neary National Surgical Training Centre, Royal College of Surgeons in Ireland Ireland

Secondary aortoenteric fistula (SAF) is a rare potential complication of aortic graft repair. Post repair of AAA the aetiology is attributed to the formation of a pseudoaneurysm at the graft anastomosis, subclinical graft infection or mechanical factors related to the graft. In the case of EVAR the formation of a secondary fistula is related to mechanical stent failure, or, distortion or migration of the stent. Endotension may also  play a role by causing pressure necrosis of the wall of the aneurysm and the small bowel.

SAF  rarer  after endovascular repair as the adventitia of the aorta remains undisturbed. With EVAR there is no suture line or anastomosis and it is at these points where a fistula typically is found following open surgery. There is often a delay between the presentation and diagnosis of a SAF. The average interval between symptoms and presentation has been reported to be 47 days (range 8 – 180 days).This is due to most investigative tests being negative or inconclusive. It is therefore very important to have a high index of suspicion for this condition. A poorer outcome is associated with a delay in recognition, diagnosis anddefinitive management.

There are two main patterns of presentation; bleeding and infection. A high index of suspicion is particularly required if the patient presents with what is known as a herald gastrointestinal bleed. Patients can also present with chronic melena, hematemesis or weight loss. However the typical presentation is with a herald bleed followed by a period of stability and then massive exsanguination and cardiovascular collapse. Patients presenting with symptoms and signs of sepsis can have fever, weight loss, an elevated white blood cellcount and c-reactive protein, and abdominal or back pain indicating a retroperitoneal abscess. Investigations include endoscopy, angiography and contrast studies.

From this we can conclude, that even though in this gentleman the cause of his anaemia was not due to a gastroenteric fistula it was a potential differential diagnosis  in view of his large aneurysmic native aorta. No bleeding was identified from his gastrointestinal tract after further endoscopy and colonoscopy, and no cause  was found for his drop in haemoglobin. The mystery was never solved ……..