Anything that affects any of these components may lead to mitral regurgitation. Broadly speaking primary causes of MR affect the leaflet and chordae whilst secondary causes are due to left ventricular dilatation from ischaemic or myocardial processes leading to distortion of the left ventricle

Of the primary causes, degenerative mitral valve disease and rheumatic valve disease are the most common causes of mitral regurgitation, however bacterial endocarditis causing tissue destruction and vegetations, along with CT diseases (ie Marfan’s), drug induced leaflet thickening (ie ergotamine), congenital mitral valve abnormalities and papillary muscle rupture are all causes of primary mitral valve regurgitation.
LV distortion due to coronary artery disease and cardiomyopathy is the most common cause of secondary MR, however, systolic anterior motion of the mitral valve 2 to a number of conditions affecting the left ventricle including HOCM and severe LVH and LA dilatation 2 to AF may also cause functional MR.
It is not uncommon to have 2 or more aetiologies at the same time causing MR such as annular dilation and degenerative mitral valve disease.

Degenerative valve disease makes up the bulk of primary mitral valve disease associated with mitral regurgitation.
This umbrella heading covers the entire MVP spectrum and nonspecific calcification and thickening of the leaflets associated with chronic renal disease, diabetes and hypertension

MVP is the most common type of primary mitral regurgitation.  The classic MVP is Barlow’s disease or floppy valve disease. Features of Barlow disease include 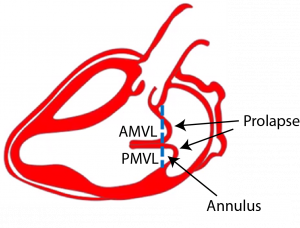 This patient presented to the emergency department with SOB on exertion and palpitations.
He demonstrates all the signs of Barlow’s disease.
The mitral valve is thickened and billowy. The chordae are thickened. There is prolapse of the mitral valve and the PMVL is flail
A flail leaflet can occur in 2 situations in Barlow’s disease when the leaflet tip everts on closing or if there is chordal rupture. In this case the leaflet tip is everted due to chordal rupture 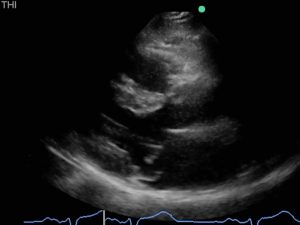 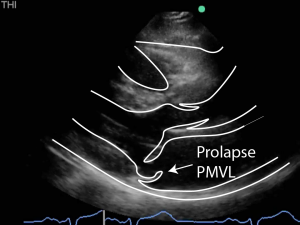 MV prolapse due to fibroelastic deficiency has the following features

This is a patient with degenerative mitral valve disease and MVP. Here the posterior leaflet of the mitral valve is seen prolapsing below the anterior leaflet. The prolapse is causing an eccentric, anteriorly directed mitral regurgitant jet 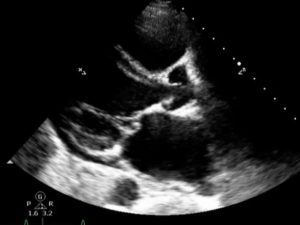 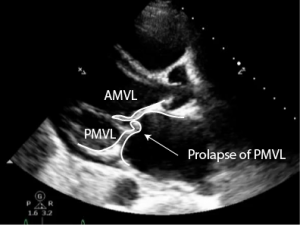 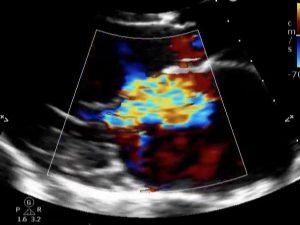 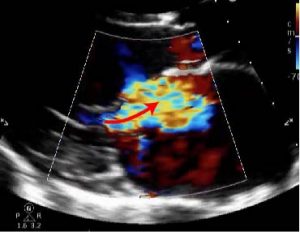 Rheumatic heart disease is characterised by

Normal MV  leaflets coapt in the midline and do not prolapse below the annular plane in systole. In rheumatic heart disease if there is excessive leaflet tip motion abnormal coaptation occurs causing mitral regurgitation. The echocardiographic criteria of mitral valve prolapse  is defined as > 2mm billowing of the leaflet into the left atrium in systole. 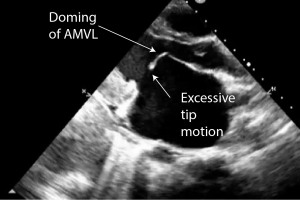 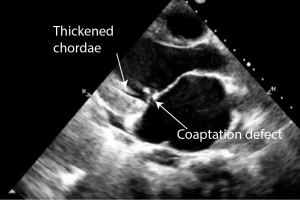 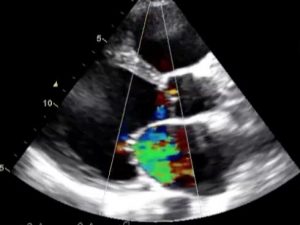 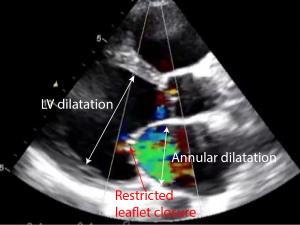 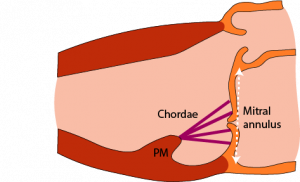 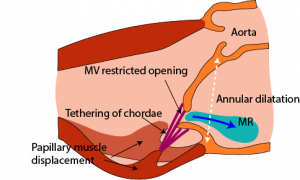 2.Systolic anterior motion of the MV

Another  cause of mitral regurgitation is SAM or systolic anterior motion of the mitral valve. This is a functional cause of MR. SAM describes the dynamic movement of the mitral valve during systole anteriorly towards the LVOT.
This causes obstruction to flow of blood from the LVOT through to the aorta in systole. Subsequently there is poor coaptation of the mitral valve in systole and functional MR.
In the past only hypertrophic cardiomyopathy was thought to cause SAM, but now it is recognised that anything that alters the anatomy of the LV may cause SAM such as structural abnormalities, geometric factors and kinetic factors. 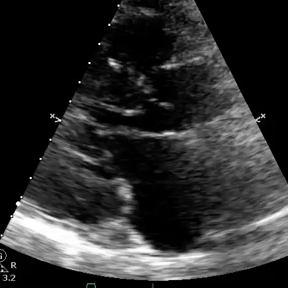 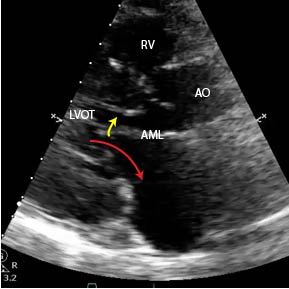