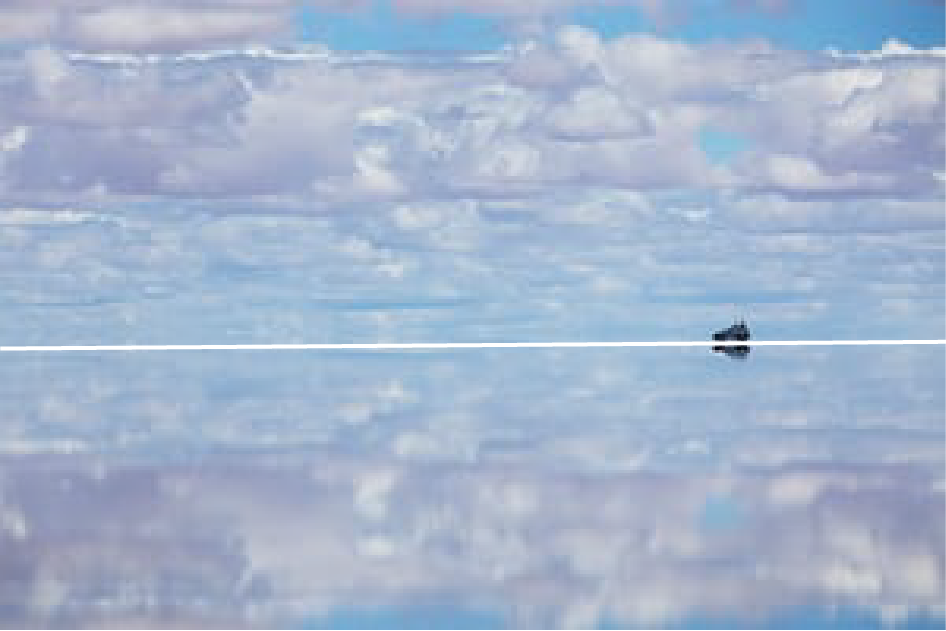 You get a BAT call. A 25-year-old with acute asthma has had a cardiopulmonary arrest. He has been intubated by the paramedics and received 1 mg of adrenaline with return of circulation. He is arriving in 5 minutes. A resus team is organised and you are in charge of the ultrasound on arrival. Mentally you prepare yourself for this patient. He has acute asthma. Did he have a tension pneumothorax to cause his cardiorespiratory arrest? What is his heart doing?

On arrival he is intubated, he has a HR of 110/min and a BP of 98/60. Saturations  95% on 100% oxygen. While bloods and monitoring are being organised you look at his right lung with a linear probe. There appears to be a lack of lung sliding. You cannot see any B lines or ring down artifacts.  This is his M mode. 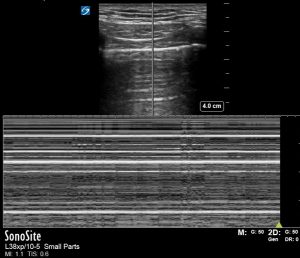 This looks suspiciously like a pneumothorax. There is one thing that bothers you however. It is this small hyperechoic “blip” on the pleural line which looks  like a ring down artifact. This would exclude a pneumothorax. 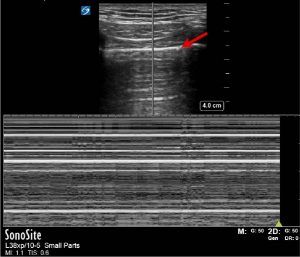 You examine his left chest and there is normal lung sliding, which can be visualised as the seashore sign on M mode. 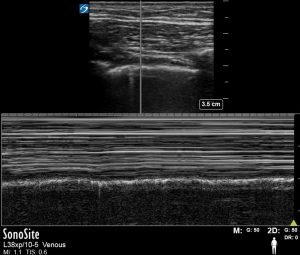 A chest Xray is organised during this time and it appears that the ET tube is too far down. The team leader asks for the ET tube to be pulled back a bit. The ultrasound is repeated on the left and there is now clear lung sliding.

The “lung pulse” on M mode in this situation may be a helpful sign. A study by Lichtenstein in 2003 demonstrated that in patients with right selective intubation, a left “lung pulse” was found to have a specificity of 93% and specificity of 100% for the diagnosis of complete atalectasis before any lung changes were visible on chest Xray (1). The “lung  pulse” may be easily visualised in healthy people in apnea. 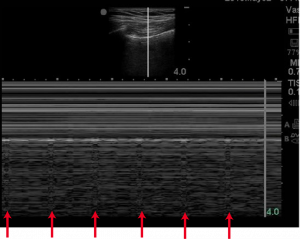 What are some of the causes of lack of lung sliding other than pneumothorax?

What signs on ultrasound  would indicate that a pneumothorax is not present?