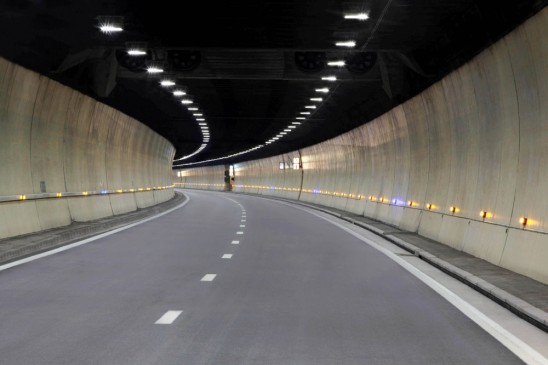 A 35 year old lady presents to the Emergency Department with chest pain. She has had a recent admission for drainage of a pericardial effusion (non malignant) and is concerned that it may have reaccumulated. An point of care ECHO was performed .There was no evidence of pericardial effusion. However, her apical 4 chamber view showed a hypermobile atrial septum.

This is her Apical 4 chamber view 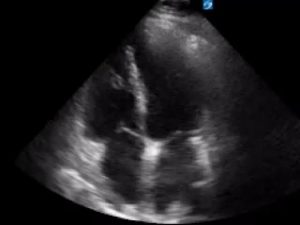 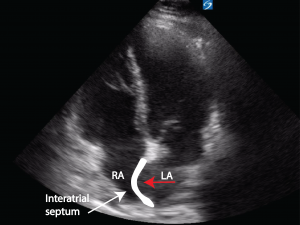 Note the hypermobile atrial septum which seems to balloon into one atrium and the other with the cardiac cycle.

There is a suggestion of a PFO. 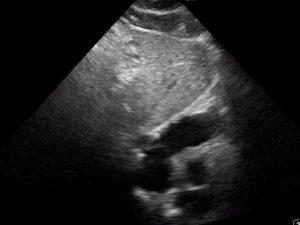 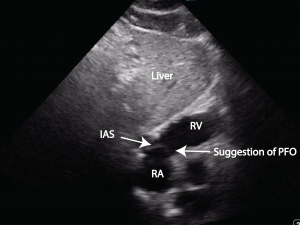 With colour Doppler, a “flame” of colour is visible at the point of the PFO and at some point during the cardiac cycle, blood flow is clearly visible going from the right atrium to the left atrium. 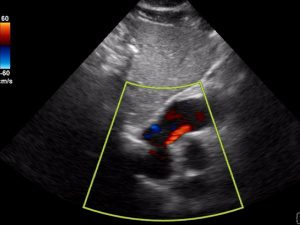 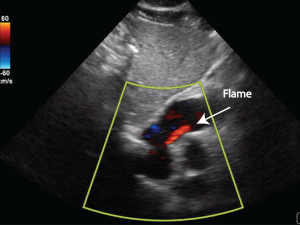 “Flame” of colour signal at the point of the PFO 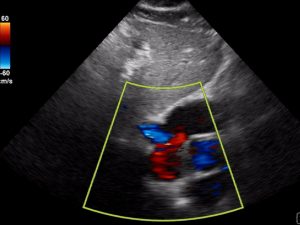 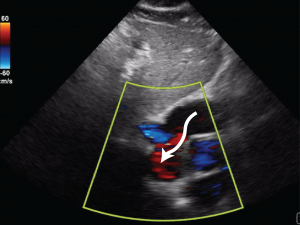 The identification of a PFO in the Emergency Department is clearly not a core skill, however it may be an incidental finding as in this case, and may be relevant  in the context of a young person presenting with possible paradoxical emboli. During fetal circulation, a portion of blood flow passes from the right atrium to the left atrium bypassing the lung. As pulmonary blood flow increases during the neonatal period, the left atrial pressures increase causing compression of the septum primum against the septum secundum, functionally closing the PFO. Anatomic closure occurs later in infancy, however autopsy studies have shown that up to 25% of the adult population retain a PFO. It is therefore a normal variant rather than a pathological finding in the absence of paradoxical embolism. (2) In general there is a trivial shunting of blood from right to left, but release of a Valsalva manoevre transiently reverses the normal  left-to-right pressure gradient and causes an exaggerated transient leftward shift of the free edge of the septum primum with apparent enlargement of the orifice of the PFO. Increases in  right atrial pressures will increase the right to left shunt.

Some features associated with PFO’s include (7)

The origin of paradoxical emboli (2) 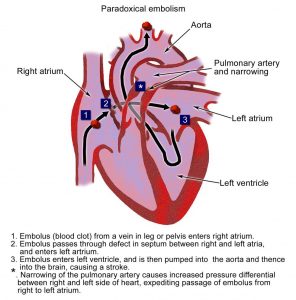 PFO’s are not always associated with hypermobile IAS. Septal hypermobility is inaccurately referred to as an atrial septal aneurysm (ASA). Inaccurate because it is not an aneurysm as such. It is defined as a mobile protrusion of the septum primum tissue into the atrium measuring at least 10 to 15 mm or a phasic septal excursion of at least 15 mm occurring at some point during the cardiorespiratory cycle (1).

Since PFOs are so ubiquitous, there is no need for any special treatment or management except in the patient with recurrent TIA’s or strokes. In this case closing of the shunt may be necessary if anticoagulation  is contraindicated or ineffective.

Teaching point: PFO’s are very common in the general population and usually cause no symptoms. There is however an increase likelihood of paradoxical emboli due to  PFO’s causing ischaemic strokes in patients under 55. This should be kept in mind when a patient presents with a TIA or ischaemic stroke in this age group.