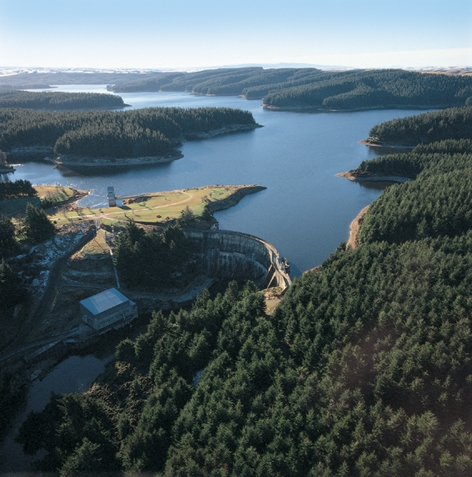 A young 26 year old girl presents to the Emergency Department with excrutiating pain to her left leg. She developed the pain acutely that morning and she can’t walk on it at all. She helps you with your diagnosis by saying that she has had a previous DVT in that leg and she is anxious she may have another one. She is not on anticoagulants.

On examination she cannot straighten her left leg because of  pain . She maintains her hip in flexion because it is the most comfortable position for her. Her left leg is slightly larger  than her right leg.

You get the ultrasound machine to check for a DVT. You start in the groin.  You are having lots of difficulty compressing the CFV because this causes her  pain. This is what you get

Note that you can’t compress the vein completely. Compression is very painful. There is a hyperechoic stripe in the vein that looks like a remant of her old DVT (synechiae). The lack of compression could be because of a partial thombus or because it is impossible to push hard enough. 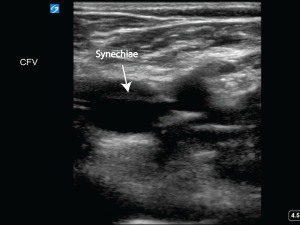 To further investigate this area you decide to do a Doppler study on the vein. 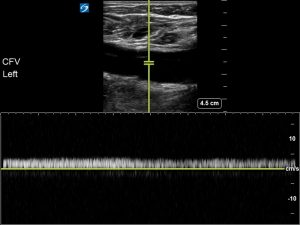 Note the flat Doppler trace which exhibits no respiratory or cardac phasicity.

You check by getting the patient to do a Valsalva manoevre 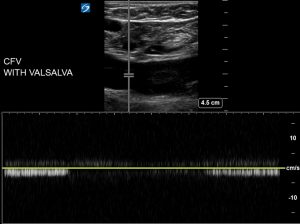 The flow is interrupted with the Valsalva but there is no change in the trace after the Valsalva manoevre.There is no augmentation. The Doppler trace remains flat.

This is what a normal Doppler venous trace should look like. 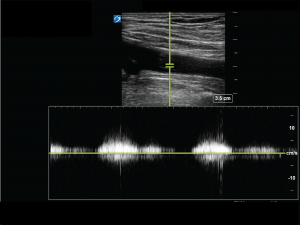 This is what a normal Doppler trace with a Valsalva should look like. 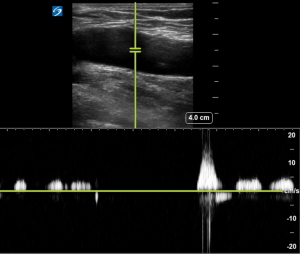 Note that when there is no obstruction, the flow stops with breath holding during the Valsalva manoevre and then increases afterwards. This is called augmentation.

The flat trace in our patient’s Doppler  suggests that there may be  a more proximal venous thrombosis either in the common iliac vein or the IVC. A venogram is ordered . She has complete thrombosis of her left common iliac vein just before it enters the IVC. A CT scan confirmes she had May- Thurner syndrome. The combination of this as well as Factor V leiden heterozygosity and the oral contraceptive is found later to be the most likely cause for this thrombosis.

Normally , flow within the deep venous system is low resistance, the venous Doppler trace shows both respiratory phasicity and cardiac phasicity. Low intrathoracic pressures during inspiration causes increased flow to the heart. With the Valsalva manoevre flow ceases and is followed  by  augmented flow after the Valslava.

A flat venous Doppler trace  is an indirect sign of a deep vein thrombosis at a more proximal location. More precisely it is a sign of  proximal venous obstruction as venous flow may be interrupted intrisincally by thrombosis or extrinsically by tumour/abscess compression for example.  In both scenarios the Doppler trace will be flat. If there is flow in both common femoral veins (CFV) and  the Doppler trace is flat in both CFV’s then this suggests obtruction proximal to the CFV bifurcation such as in the IVC. If there is a flat trace in one CFV and a normal CFV Doppler waveform in the other then this suggests that the thrombosis is in the common iliac vein on the side of the flat trace, not in the IVC.  Respiratory factors can also cause loss of waveform phasicity. This loss of phasicity will be bilateral however and not asymetrical. (3)

There is usually at least one risk factor for venous thrombosis causing endothelial injury and hypercoagulability, along with stasis ( Virchow’s triad ) (2). These include 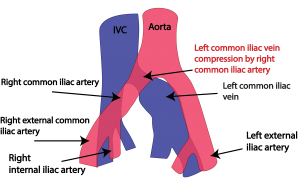 Iliofemoral DVT due to the right common iliac artery overlying and compressing the left common iliac vein against the lumbar spine.

A special mention should be made of DVT in  pregnancy as an iliofemoral DVT  can be overlooked in the Emergency Department. Any pregnant woman presenting with a possible diagnosis of  DVT should have an  investigation for an  iliofemoral DVT. The incidence of DVT’s overall is  5 x higher in pregnancy than in age matched controls in non pregnant patients and most frequently found  either in the calf veins or in the iliofemoral segment of the deep venous system.

Predisposing factors  for DVT in pregnancy include: