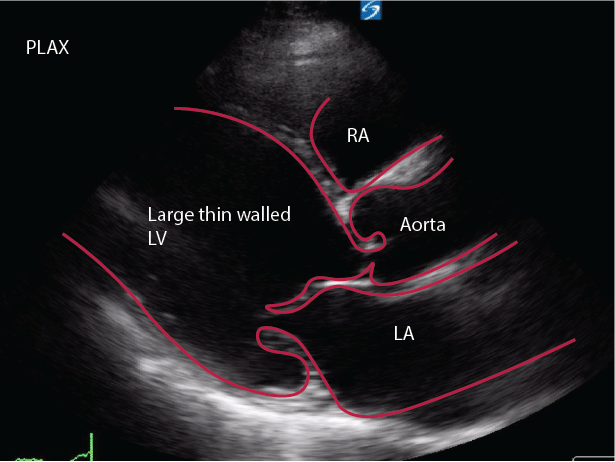 Parasternal long axis of the left ventricle, (PLAX) demonstrating dilated LV, right ventricle, (RV) and left atrium, (LA).  LV contractility in this view is moderate to  severely impaired with some preservation of the IVS  motion. 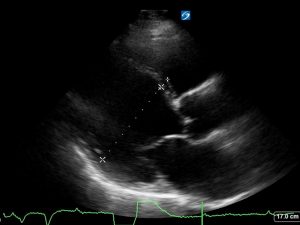 Measurement of internal diameter of LV at end diastole. 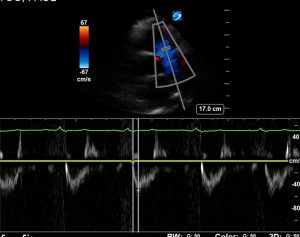 Pulsed wave Doppler of the right ventricular outflow tract using the parasternal short axis at the level of the pulmonary valve.  The measurment of the RVOT trace is the acceleration time, taken from the commencement of flow to the peak of flow. Normal RVOT acceleeration time  is > 100ms.  Short time < 100ms suggests increased pulmonary vascular resistance.

Parasternal short axis at the level of the mitral valve ( mid wall segments) demonstrates a dilated LV with moderate to severely impaired contractility with some regional variation.  The IVS is moving better than all other wall segments.

Apical 4-chamber view slightly foreshortened but demonstrates the dilated LV, LA and the pacing lead in the RV / RA passing across the tricuspid valve.

Subcostal long axis view of the IVC as it enters the right atrium.  The IVC does not appear to be dilated (but no index markers or measurement) there is only minimal IVC collapse with respiration.